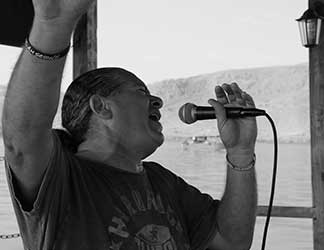 Born in 1964 to a young unmarried Orthodox Jewish woman, I was given up for adoption to a very loving secular Jewish family who lived in the northwestern port city of Haifa, Israel.

Since I grew up near the sea, I was fascinated with sailing and thought it would be exciting to work as a ship captain. When I completed my mandatory Israeli army service at the age of 21, I decided to pursue my dream of becoming a boat captain. At the age of 24, I began piloting tugboats in the Haifa port.

My adoptive parents never kept it a secret from me that I was adopted. Therefore, after a personal crisis at age 28, I decided to have my adoption files opened. When I met my birth mother for the first time, I discovered that I had a whole new family, three brothers and one sister, all living in the Galilee region of Israel. Feeling the need to connect with them, I moved to the Galilee. I found accommodations on Kibbutz Ginosar and acquired a job operating tour boats on the Sea of Galilee.

While piloting the boats, I was exposed to God’s Word every day as pastors preached about Yeshua (Jesus in Hebrew) to their congregations on the boats. I was impressed by their prayers and moved by their worship songs. People on the boats also told me about Yeshua and prayed for me and I could always feel the presence of the Holy Spirit. For five years, I pondered what I heard about Yeshua. Then after 5 years i woke up with a great love to Yeshua. This did not come as a surprise because I had felt Him working in my heart for some time.

With this revelation, my whole life changed. I began to see my job on the tour boats not as a job, but as a ministry. I fell in love with the worship songs that were sung on the boats because the words expressed the love and worship I felt in my heart for Yeshua.
Sometimes the believers I met on the boats would send me CDs of their worship music. I began playing the CDs for the believers on the boats. My desire was for the believers who came to the Sea of Galilee to have an unforgettable worship experience.

Music has always been a major part of my life. I have played the drums since my youth. After I met Yeshua, my interest in music expanded to include both the singing and the composition of worship songs.
In 2002, I started a music ministry called Hebrew Worship Songs in which I began translating popular English worship songs to Hebrew and recording them. I wanted believers to hear the songs they loved in our Lord’s language, and I wanted Israelis to hear about Yeshua through my music. 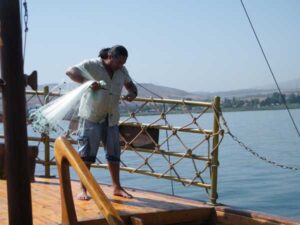 I had been employed by another Galilee sailing company during the years I have spoken of. After I became a believer and was still working for them, it became known to the tourists on the boats that I had become a believer in Yeshua. At first, my employer thought having me on board was a good way to attract business. As my popularity increased with the tourists, my employer began to see me as a threat so he let me go. The groups that knew me asked me to sing for them in their hotels and invited me to do a USA worship tour in 2006. When I returned to Israel after the 2006 USA worship tour, the Lord literally gave me my own boat, and that was the beginning of Sea of Galilee Worship Boats.

In October 2007, we dedicated our first worship boat, FAITH, and officially opened Sea of Galilee Worship Boats Ltd. to be a blessing to believers from many countries around the world and to Israelis here at home.

I give glory to God that many guests who have sailed with us have afterwards written to tell us how meaningful and special it was for them to worship the Lord with us on the Sea of Galilee. Many even say it was the highlight of their trip to Israel. It is my wish and prayer that you, too, will feel the Lord’s presence and anointing during your worship experience on Sea of Galilee Worship Boats. 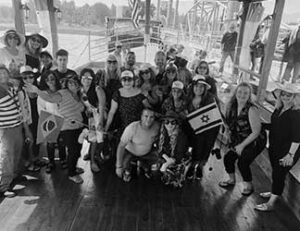 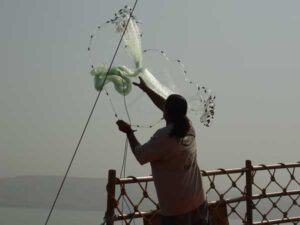